CFS Lecture by Bret Davis: "Nishida and Cross-Cultural Dialogue: Toward a Radical Cosmopolitanism"

Title: "Nishida and Cross-Cultural Dialogue: Toward a Radical Cosmopolitanism" 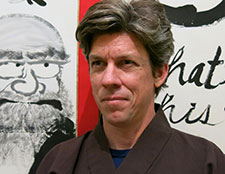 Abstract:
Nishida Kitarō (1870–1945), modern Japan’s preeminent philosopher, developed his thought by engaging in a dialogue between Western philosophy and Japanese traditions of thought, especially East Asian Mahayana Buddhism. Moreover, among the topics of his thought is the very nature of such a dialogue between cultures, as well as the nature of the historical world in which cultural traditions develop by way of a dialectical interaction between individuals and their societal “species.” Nishida attempted to find a middle way between a “cosmopolitanism” based on an “abstract individualism” that fails to recognize the cultural embeddedness of individuals and a “totalism” or “communalism” that denies the freedom and creativity of individuals. In this paper, by way of taking up some core insights as well as engaging in an “immanent critique” of certain problematic aspects of Nishida’s thought, I argue for a “radical cosmopolitanism” that acknowledges both the extent to which individuals are deeply rooted in their respective cultures and the manner in which they are, in a still more radical sense, citizens of the world capable of entering into cross-cultural dialogue.