CFS Lecture by Jeff Malpas: "Topology, Hermeneutics and the Transcendental"

Jeff Malpas is Distinguished Professor at the University of Tasmania, as well as a Distinguished Visiting Professor at Latrobe University. Trained as a philosopher, Malpas works across a range of disciplines including the creative arts, architecture, and geography. His work is strongly grounded in post-Kantian thought, especially the hermeneutical and phenomenological traditions, although it also incorporates aspects of analytic philosophy, and is centred on the project of 'philosophical topography' – a mode of inter-disciplinary philosophical inquiry that takes place (or 'topos') as its key concept. He draws on the thinking of a diverse range of thinkers including Hannah Arendt, Albert Camus, Donald Davidson, Martin Heidegger, and Hans-Georg Gadamer. He is co-editor of the Springer series Contributions to Hermeneutics and the Journal for the Philosophy of History. 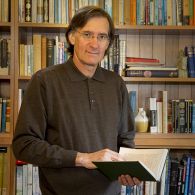